The Claimant Count is the most reliable data that we use in MtW.  While figures are published monthly by the Office for National Statistics (ONS) it is still only an estimate, but one which is directly sourced from the DWP / Jobcentre Plus admin system.  It covers the whole of the UK.

The Claimant Count is NOT just about unemployment, but there is a large overlap.  It does not meet the internationally agreed definition of unemployment specified by the International Labour Organisation (ILO), but does include people on UC who are in work but with very low earnings.  Additionally, the Claimant Count can include some people who are NEET and economically inactive.

Trends in the Claimant Count since March 2020.

The table below shows the trend in Claimant Count since March 2020 for those aged 16 to 29 in the UK. The latest published figures are for March 2022. 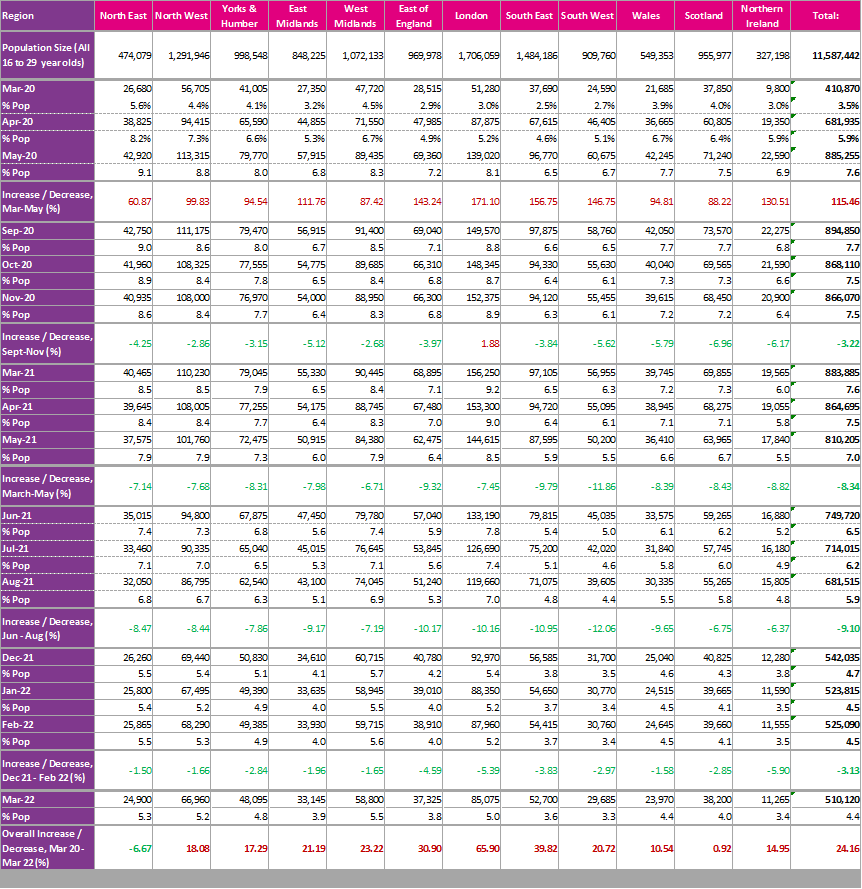 From February to March there was a decrease of 13,695 in the Claimant Count for those aged 16 to 29, compared to an increase of 1,275 in the February figures.

Overall UK unemployment for all ages is now 3.8%, which is down 0.2%.  There is now 2 years of Claimant Count data since the start of the pandemic, and as can be seen above, the current total is still nearly 100,000 or 24% higher than 2 years ago.  Only the North East is in a better position than it was 2 years ago, although Scotland is nearly back to parity.  As a region, London is experiencing the slowest recovery.

Other figures of relevance to the employment market are as follows:-