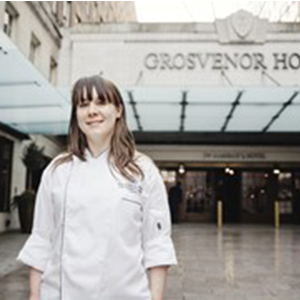 “Before Movement to Work, I couldn’t think about the next day, but everyone at The Prince’s Trust and Marriott Hotels were so supportive, and now I am planning my future.”

Nicola was bullied at school and had a difficult upbringing with her parents at home. While studying, she suffered from a breakdown and, because she was so unhappy, she dropped out of her Hospitality Management course, left home and ended up living in a tent for three months. Three years later, at the age of 21, Nicola was diagnosed with lymphoma. She recovered, but suffered another breakdown. “That’s when I was diagnosed with OCD, social phobia, low self-esteem and confidence issues. I needed medication and intense psychotherapy.” Nicola said.

Nicola eventually turned to The Prince’s Trust’s ‘Get Into’ programme – part of Movement to Work –which aims to build the confidence and motivation of disadvantaged young people. Nicola was offered a work placement at the five-star Grosvenor House JW Marriott Hotel in Mayfair, London, where she gained experience in a number of different departments. After overcoming some initial nerves, she enjoyed the role and asked to extend her placement when it came to an end. Nicola now works full-time in the Pastry Kitchen at The JW Marriott Grosvenor House and has ambitions of travelling to France to train as a pastry chef before continuing her career in the hospitality sector.

“Before Movement to Work, I couldn’t think about the next day, but everyone at The Prince’s Trust and Marriott Hotels were so supportive, and now I am planning my future.” Nicola said.

Nicola was awarded the HomeSense Young Achiever Award at The Prince’s Trust and TK Maxx ‘Celebrate Success’ Awards, aimed at recognising the achievements of young people who have overcome disadvantages with the support of The Prince’s Trust.