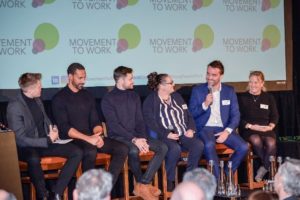 The Awards Evening saw young MtW graduates, employers, charity and delivery partners come together to celebrate the outstanding and impactful achievements that took place over the course of 2018. The theme of mentorship was one that ran throughout the course of the evening – fitting as Movement to Work is about positively impacting young people, in order that they can unlock their talents and fulfil their potential through the world of work.

Mentorship can take many forms but the essence of empowering a young person to pursue opportunities and providing helpful guidance that opens a world of possibility – were common themes. Those messages were prominently endorsed by the stories of the award winners. Additionally, the theme was further brought to life during a panel discussion, which shared the personal experiences of panellists. Jake Humphrey was joined by Spencer Owen aka Spencer FC, Rio Ferdinand, and some of the ‘Mentor of the Year’ and ‘Individual Impact’ award nominees, namely, Kieran, Tracy-Jane and Pauline. 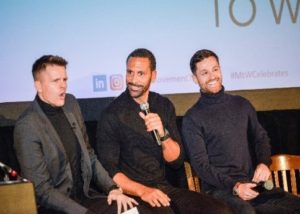 Tracy-Jane explained that a work experience placement and some helpful guidance when she was a teenager allowed her to embark on the first chapter of her career with 10 years spent in the hospitality sector. In her current role with the Department for Work and Pensions and through her passionate commitment, 20 of the 29 young people she mentored last year progressed into employment. Pauline shared the transformation that she has observed in the 234 young people who have come through the Diageo ‘Learning 4 Life’ programme – indicating that the change in their self-belief has been truly remarkable. Rio spoke of the impact that Sir Alex Ferguson had on so many young footballers’ careers – highlighting his diligence and work ethic, over such a lengthy managerial career, as an example to all. Jake shared his personal career journey that involved the early setbacks of terminated employment and failed A-levels, encouraging young people to be resilient and ambitious.

Exploring the important role that mentoring plays was inspiring and thought-provoking in equal measure. Likewise, in celebrating the achievements of 2018 and the 80,000 Movement to Work placements that have been delivered to date – it allows our members to look forward to 2019 with excitement and an energised sense of purpose.