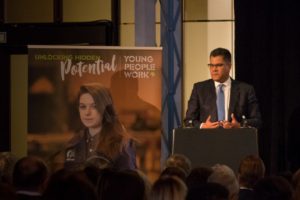 Government reaffirms the importance of Movement to Work

The Government was crucial to the foundation of Movement to Work in 2013 and at our recent awards reaffirmed the importance of the work we do together. Alok Sharma MP, Minister of State for Employment, who provided the keynote address at the event, pointed out that though youth unemployment has reduced we cannot be complacent. He said that he was determined to ensure that the Government makes further progress to ensure that every young person has the opportunity to benefit from a stable job.

He paid tribute to Movement to Work and you, our members, describing the really positive news that the 80,000 placements we have provided over five years has led to tens of thousands of young people getting opportunities in the workplace. He also highlighted the Government’s ongoing commitment as an employer, with thousands of placements having been completed in the Civil Service.

Rt Hon Amber Rudd MP, Secretary of State for Work and Pensions, shared with us her views on the importance of the work we do: “Giving a young person a chance, sometimes one of the few chances they may have been given, is often transformative. Doing this can lead to changes that have a lifelong impact, not just on the young person but on their communities too.” She urged all businesses and organisations to consider hiring more young people, saying that they are an “unrivalled source of fresh perspectives, unrivalled ambition and energy.”