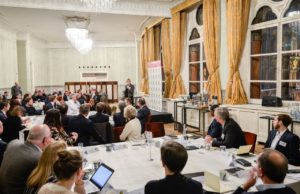 This year’s CEO Summit brought together chief executives and other leaders of some of the UK’s largest organisations, youth outreach partners and young people who had gone through employability schemes found through Movement to Work. The aim of the discussions was primarily to explore the issues facing young people who need extra support to get on the career ladder.

The CEOs and leaders included those from Accenture, BAE Systems, Barclays, BT, Centrica, the Civil Service, Diageo, KPMG, Marks & Spencer, The Prince’s Trust, QA Learning, Tesco, UK Youth and Unilever, amongst others. Many of the young people now working in those organisations joined their leaders in the discussions.

There were four discussions: making the skills reform accessible for all, supporting all young people into employment, looking deeper into the labour market in a climate of skills shortages and for the next generation, every job will be a tech job.

Some of the principle themes resulting from these discussions will be of no surprise, for example, the quality of careers guidance in schools. There was unanimous agreement that this still wasn’t working. The Apprenticeship Levy was also criticised, with some pointing out that instead of helping young people onto entry-level apprenticeships, and pre-apprenticeship training, some of the Levy money had been diverted towards MBA training for existing executives!

It was apparent from the debates that many socially responsible employers who wanted to look deeper into the labour market were encountering difficulties in finding young people. This is despite so many young people wanting to find work, whilst the UK is suffering from a skills shortage, yet many young people who could be trained are unemployed. It was felt that regional and local government, who could do so much to help, are disconnected from the issue.

However, there was positive news, and this was how young people who have had extra challenges in their lives can become great employees, with huge talent and loyalty. And the young people at the discussions were great examples. There was much discussion of the value of mentorship, particularly around how these young people were able to influence positively other young people who were not obvious candidates for some roles.

Movement to Work believes that all the issues discussed are wholly addressable, and we are working towards this. Already we have arranged thousands of placements with over 50% of those completing them going onto jobs or back into education. We are writing to Government Ministers and others in order to provoke action to address as many of these issues as we can, and in some cases resolve some that have been with us for too many years. We will keep you informed of progress.