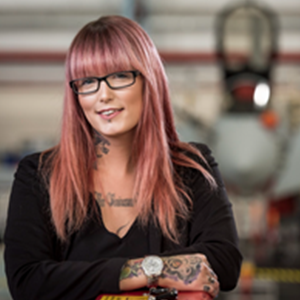 “And to employers I would say don’t write off anybody for not having the right qualifications, you never know what was behind them not achieving in that one small way. And it gives people like me a further determination to succeed against all odds.”

Anastacia Jamfrey, 29, from County Durham, is a project manager at BAE Systems, the defence technology manufacturer. But this job wasn’t an obvious outcome for Anastacia if her early life was anything to go by.

“When I was a child and went to other people’s houses I was amazed to see carpets and curtains, they seemed like a real luxury to me,” said Anastacia. “My parents split when I was two and education wasn’t a priority. Primary school went ok though, and so did the first years at secondary school but I started getting bullied by people in my class.

“The result of that was that I started hanging out with people who were older than me, the wrong crowd. I more or less stopped going to school and then the next thing I knew I was drinking in the park at 13. And then I was pregnant at 15.”

This is something we hear frequently at Movement to Work, young people driven away from education by bullies. The education system must get better at handling this. Especially when, in later years, many people and potential employers are to ready to blame the victim for missing out on their education.

Anastacia attended school so rarely that she was not put forward for many of her GCSEs when the time came. But she did manage to pass GCSEs in English, business studies, IT and RE. Of the last one she said: “I was good at subjects where you could argue!” In fact, Anastacia took her last GCSE two days before giving birth to her son. “Over the last few months before the exams I really decided to focus on the them, and oddly enough being pregnant helped with that, though I wouldn’t recommend that strategy to others!”

Anastacia was really worried about her future. She was suffering from post-natal depression and also had to think about training and working whilst caring for a baby. She did a level 1 qualification in car mechanics but childcare was too difficult to manage for a level 2 qualification. She applied to join REME, the army’s mechanical and electrical engineers but her history of depression meant that she was deferred. Her attempts to find roles in car mechanics were not successful, and she was even advised at a Job Centre to look for ‘women’s jobs’ and not where her interests were, in engineering.

Anastacia found a job as a cleaner and after this role went on to apply for a role at the Department of Work & Pensions, working in customer service. This led to another role in customer service, working in an eLearning company, where she took full advantage of the training available and gained some level 2 qualifications. However, she was again struggling with depression and was unable to continue as her employer would not support her through her illness. Eventually she left and decided to move to Lancashire to be with her new partner.

It was here that things changed for the better, and through the Job Centre there Anastacia was offered a Movement to Work placement with BAE Systems. “I was amazed to be selected at the assessment day,” she said. “I learnt so much and got work experience in quality assurance. At the end of the placement I had to speak about my experience in front of an audience, part of the selection process for those people that BAE wanted to employ.

“I was so nervous that I cried but I did manage to say that I’d be there, talking to the new cohorts on the Movement to Work scheme the next year! I am constantly reminded of that confident statement, despite my nerves at speaking, by my managers. But it paid off. I was offered a sub-contractor role training to be a quality engineer, providing assurance support to internal and external suppliers.”

During this time Anastacia was keen to progress and successfully applied for a two-year business management apprenticeship at BAE. She is now a project manager working on projects, for example, on replacing the use of hazardous chemicals and materials with alternatives. She is keen to do a project management degree and has cleared one hurdle, her lack of GCSE maths, and hopes to be able to take up that course as soon as possible.

“I want to be a project management director,” said Anastacia, “That’s my aim. But the message I want to send is don’t let anyone tell you what you can and cannot be. Do your best to get work experience and decide for yourself what you want.