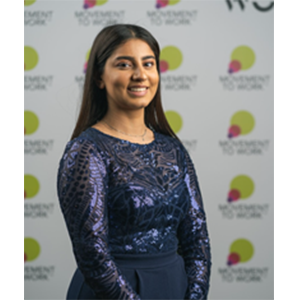 I feel like the only way is up from here as I know now I don’t want to be anywhere else. IBM has not only given me a life changing opportunity but has been supporting me throughout my journey. Looking longer term I would love to eventually progress onto an apprenticeship once the time is right and once I have more insight into possible roles at IBM.

I initially started out my career at IBM as an Ignite trainee which means I spent 4 weeks as part of a team gaining skills to help me on my journey in the big bad world of employment. IBM partner with a charity called City Gateway for the Ignite scheme so trainees start off preparing themselves at City Gateway by doing group exercises and mock interviews and other readiness activities before coming to IBM’s assessment centre.

I still remember being terrified thinking IBM would be a huge place with security guarding every door and not a smile to be seen anywhere around. I was pleasantly surprised once I saw how friendly and welcoming everyone was.

I didn’t want a job at IBM at first as I thought it was a place purely for technical people however during my 4 weeks I became a lot more aware of just how huge IBM was. They literally had a place for everyone! However, that wasn’t what made me want to come back, it was more the people around me that changed my decision and made me work super hard to get noticed so I could come back somehow. I had an amazing team, mentors and made great friends during my 4 weeks so I really did not want to let that go.

During my time at IBM I was introduced to a range of different tasks that I had never come across before. A lot of the work was very Excel based, however I quickly picked up new skills. As part of the program I was assigned mentors, who were key to my success on the Ignite program and really helped me reach my full potential, which I still appreciate and keep in touch with. I was also able to slowly build up my network whilst I was an trainee and many of my contacts are still engaged and helping me now. The programme was not just a work placement, but we also had days which were focused on the development of soft skills, such as back to base days including an escape room which really helped me come out of my shell and work as part of a team!.

Once my placement was close to coming to an end I was informed there was a position on a Short Term Placement program, (6 months) which would allow me to come back to IBM and possibly move further in my career. I remember Helen delivering the news to me and I’m pretty sure I jumped into her arms to give her a hug. As much as I wanted to come back I never thought I would get the chance and hearing how impressed everyone was with me during my placement and how they wanted me to join IBM as an employee actually made me shed a tear or two.

I returned to IBM a month after my work experience placement had finished and hit the ground running. I knew this was not an opportunity that I wanted to waste. Within my first 4 months at IBM I received even better news from my manager that she had approval to extend my contract and move me onto the Futures scheme (1 year programme).