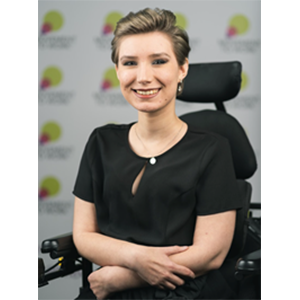 “Since knowing Aimee,  I have seen her grow in confidence and she is now able to save up towards her goal of going to drama school, which has developed her enthusiasm to stay motivated. It is amazing to see her progress and the fact that her contract has been extended shows how hard she works and how well she fits in with the team.”

Before engaging with the Trust, Aimee had graduated from college the year before, but found herself struggling to find employment due to her mental health deteriorating. Aimee was struggling with depression and found It hard to leave the house. This meant that she lost contact with her friends and was sanctioned twice due to missing her Job Centre appointments.

Her physical health also started to decline, as Aimee is diagnosed with Spinal Muscular Atrophy (Type 3) which causes her muscles to weaken and her physical mobility to deteriorate, meaning she now relies on a wheelchair.

Since her Performing Arts course at college, Aimee wanted to be an actor in London. Her goal is to save up money so she can go to drama school but was unable to save money whilst she was unemployed.

Aimee engaged with the Get Into Retail programme with Marks and Spencer, completing group sessions and work experience in the Eastleigh store.

Initially, Aimee said she was very nervous about attending the programme, but felt that everyone was really welcoming. Reasonable adjustments were put in place to support Aimee in store, which meant she was able to take part in the work experience where she received excellent feedback from the Delivery Partner.

Considering Aimee’s anxieties about meeting new people, she got involved in the group sessions and her confidence increased, which was evidenced in her moving speech at the MtW Celebration Event in 2020.

Aimee successfully completed the programme and was offered an initial 3 month part time contract with Marks and Spencer which was subsequently extended. Since starting work, Aimee has settled in exceptionally well, with staff members saying she is part of the family.

Aimee has enjoyed having a routine again, ensuring that she gets to bed on time and arrives early for work. Aimee recognises that she still has bad days with her mental health, but generally she has seen improvements and she is better able to manage this.

Aimee tells me that her family life has improved, as her mum is proud of her and does not have to worry about her being home alone all day. Aimee also said that getting paid weekly has been a big shock as she no longer worries about money and is able to start saving towards her goal of going to drama school.